Welcome back, squash fans! This week’s guest is Chris Smith, and the episode is structured a little differently than the others. The majority of it was recorded over three years ago, but was never released, so Conor recently recorded a quick follow up to bring it all together.

The episode starts off with a brief conversation about where Chris is now and what has changed in his life over the past few years since the original conversation was recorded back in 2018. Most well known for being the Head Boys and Girls Squash Coach at St. Paul’s School, along with the Associate Dean of Admissions at the school, Chris has recently added the title of Associate Director of Athletics to his title.

After the intro concludes, the episode 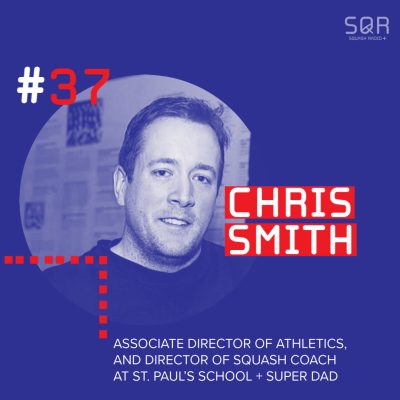 recorded back in 2018 begins with a conversation about how Chris started at St. Paul’s and his experience working on the admissions side of things while being the head coach, and how the two intertwine. He discusses his experience working with both the boy’s and girl’s teams at the school, and how he’s helped them grow. He talks about the recruitment process, including the ins and outs of prep school championships. Chris has interesting input about what sets St. Paul’s apart from other boarding schools, and how he was working to bring in more international students as well.

This leads into a conversation about Chris’ coaching style, and how attending a boarding school while playing squash can really help to set players apart from others in terms of the college recruitment process. He talks about how he was trying to bring more of a college level coaching style to high school, and his hopes for growing the prep school league.

Conor brings up the topic of technology and Chris discusses how he has utilized it to help evolve the squash courts at St. Paul’s through scoreboards and microphone sound systems.

The conversation shifts when Conor asks about Chris’ three and a half year old daughter, Avery, who at the time had recently received a cancer diagnosis. He talks about what the road ahead was going to look like, how she was doing, and how their lives were changing, but especially how they were keeping their positivity. He mentions the support they had been receiving, and what they were doing to support other families in similar positions. Conor asks a couple quickfire questions, which ends the episode from 2018.

There’s a brief follow up in which Chris discusses where Avery is now, how she’s doing health wise, and how they’ve managed to stay positive through the years.

Be sure to tune in to an episode filled with advice from someone very involved in the boarding school squash and recruitment world, ideas on how technology can change the game of squash, and emotional words and stories from a rock star dad!

SPONSOR: This episode of Squash Radio (SQR+) sponsored by ProSportLED – the most advanced lighting technology for your racquet sport needs.