Published by Squash Radio on September 16, 2021

Welcome back, squash fans! This week we have Manek Mathur on the podcast. Most well known for being ranked the #1 doubles player on the SDA Tour, four-time College Squash National Team Champion, DJ and music producer and his new career path in the world of real estate. 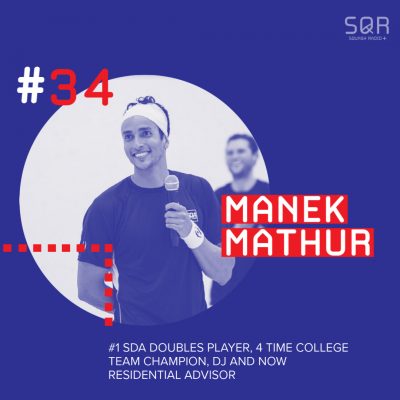 with his coach (Paul Assaiante) and fellow teammates. Originally from India, the transition to being an international student at Trinity was welcoming, in large part to the squash family community built over the years. This was huge for Manek and a common theme throughout the episode.

He shares what competition was like among teammates, including tension, but how they moved past it to thrive and create lifelong friendships. There’s a shift in the conversation when Conor asks about a former teammate (Shaun Johnstone) and how they all handled the news of him being diagnosed with Cancer. Manek shares how the community dealt with it and what can be learned from it.

The episode continues with Conor asking about Manek’s experience moving from singles to doubles, and eventually being ranked #1. Manek talks about the transition and how he took pointers and tips from other players along the way.

Manek then discusses his time at the Racquet and Tennis club, and how much he enjoyed his time and his community there, along with the changes he made to improve the club.

The conversation shifts to the topic of Manek’s passion for creating music, more specifically, as a DJ/Creator. He brings up how music used to help him before playing matches, and has since become a lifelong passion. Conor and Manek talk about the “flow state” and how that’s a common theme in both Manek’s music making and squash game. He gives advice on how to be productive in one’s craft, but not let it take up too much time.

The episode begins to draw to a close when Manek talks about his fairly recent career change into real estate. He’s currently working in Brooklyn, NY, and loving his new job. Of course, the episode finishes with the classic “quick fire” section, where Conor asks questions about Manek’s interests and passions beyond the squash world. Tune in for an episode filled with topics about community, creativity, finding one’s passions, and how it all intertwines!

SPONSOR:
This episode of Squash Radio (SQR+) sponsored by ProSportLED – the most advanced lighting technology for your racquet sport needs.